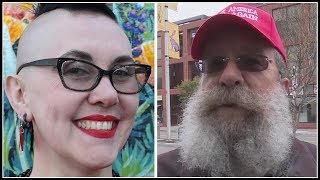 The Banning of Conservative Speech in America

I posted ONE political video clip to my Pinterest a few days ago. I am wanting to do my part against the ILLEGAL censoring of conservatives. This post is based on that. For those who say that conservatives are not being censored, I offer the following evidence, JUST IN MY social media. 1. My Twitter has me shadow banned. Anything that I post is invisible to the entire social network. So, months ago I stopped using Twitter. 2. My personal business website has literally disappeared from Google searches. I am not even found after the 100+ pages in results. My monthly visitors went down to less than 500 new people per month. All I have left at my business is word of mouth business. My business growth has been decimated. PLUS, for the last week, WIX, my website provider, continues to block my publishing or saving drafts of my blog. I’ve reported the problem to technical support who claim that my SUDDEN inability to publish blog posts HAS TO BE MY FAULT. I had been publishing daily off my cell phone until I began writing about political subjects. Not sure if this post will go thru either.  3. My Pinterest account went from over 75,000 monthly viewers less than 72 hours ago, to 14,000 this morning and now down to 9,700 within a few hours today, this morning. For those who say the silencing of conservatives is non existent, I wish to offer you my LIFE as an example. Not only are we silenced socially, but our businesses are affected as well. Free speech is on its way out in America. Who knows how long before FB bans me too for posts like this. (This is a Facebook post that I’m trying to publish on my blog. I began publishing on FB since I was locked out of publishing anything on my blog.)  I keep reminding people that there’s one RECENT government structure who began censoring opposing political views and ran their media- backed, liberal propaganda non stop. That government came to power by silencing all conservatives. Their leader was Adolf Hitler. A man who was a vegan and for animal rights. For months I’ve been saying on all of my social media platforms that the refusal to teach about Stalin, Mao, Hitler, et all, will have consequences. The younger generations will be seduced by these “ideals”, which always lead to the same outcome. Here’s the sequence: 1. The death of free speech. 2. Grab of power. 3. Strip all rights from citizens. 4. Enforce THEIR ideology on the ENTIRE country. 5. The death or imprisonment of those who disagree with the newly established government. (China is good at this.) 6. War crimes against civilians. 7. Hopeless and helpless population left at the mercy of their new Gods, the new Socialist elite rulers who control every aspect of their lives.

Alexandria Ocasio Cortez is a perfect example of this Socialist movement. Her Green Deal prohibits people from plane rides, car rides and from eating cows, just to name a few points. HOWEVER, her campaign receipts show that she refuses to take the subway or the bus. She has hundreds of Uber receipts and flys to Washington from NYC, despite NYC having some of the best public transportation in the country. Let us not forget that she enjoys eating her burgers made of cows. How about the fact that she Tweets that those in the “cheap seats” have no say so in law making. She’s the boss. She’s your boss. She will tell you how to travel, what to eat and she will not abide by those same rules because she’s part of the elite Socialists. Plus, she doesn’t care what you think or what you want. Now, she’s surrounded in a fraud scandal that may lead her straight into jail for possibly disappearing 1 million dollars in donations. THIS is Socialism. The ruling class stop your rights and then tell the citizens to shut up and do as they’re told. Does that sound great to anybody?! I didn’t think so.

Understanding the definition of the words that you use daily is very important.

The United States is NOT a Democracy.  We are a Constitutional Republic. In a Democracy, when your neighbors gather together and decide they will take your child’s bicycle away, in order to give it to another neighbor’s child, this is allowed. The majority ruled against you. This is mob rule. This is hive mentality. That is an example of a Democratic society.

We are a Constitutional Republic. We are governed by laws. If a mob decides to steal your child’s property to give to another, that’s called THEFT. The majority do not rule. We are a nation of laws and not a nation of hive mentality with mob rule!

Understand what the words that you use mean.

For those who view Socialism as a wonderful new idea that will fix all of your problems, understand WHAT Socialism is! I already gave you AOC as an example. She was a bartender that has been puppeteered into taking control of the entire Democratic Party. Nancy Pelosi et all are irrelevant now. However, their irrelevance hasn’t stopped the entire Democratic Party from jumping on the Socialist bandwagon.

Why is Socialism a bad idea?

Well, Socialism is the grabbing of power from the lower classes. The elite rulers of the Socialist society live like Gods, while the common population is enslaved. You like the idea of free tuition, free healthcare, and having the government take care of your education and every need? LOOK AT CHINA!

You want to have gun control? LOOK AT MEXICO!

You think the government will make you feel safe? LOOK AT BRITAIN. They have what looks like marshal law, “to avoid knife attacks.”

Remember that Britain took away their citizen’s rights to bear arms. Remember the list above I mentioned? Removing the rights of the citizens is followed by the enforcing of THEIR power over ALL citizens, thru marshal law. Next are the imprisonments and death of anyone who opposes. Britain will soon become China.

We live in the most amazing country in the world. Capitalism is NOT perfect, but it is better than Socialism! It is up to US to make this country great.

The bleeding of the low Classes is NOT the fault of the billionaires. The billionaires create economic growth and jobs. Look at any country without billionaires and look at their societies.

The bleeding and financial death of the lower classes is mostly due to the Federal Reserve financially killing Americans coupled with the fact that people are voting Socialist “Democrats” into office.

I fully understand why my words are considered dangerous to the parasitic rulers but I am not sure why these concepts would be so controversial to some people.

If you found this information helpful, please share on your social media. Looking forward to meeting all of my new readers. © Copyright 2019 ElizabethSite.com. Author: Vivian Elizabeth Marquez De La Garza. No portion of this blog post may be reproduced without written authorization from both ElizabethSite.com and author. All rights reserved.